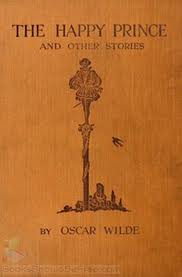 The first time someone reads The happy Prince, the natural tendency is to feel some kind of emotion deep inside, but only after having read it three times at least, the reader will be able to discover to what extent Oscar Wilde moves senses from happiness to sadness and so on.

The text deals with the subject of love from an ambiguous point of view. Once upon a time, there is a Swallow in love with a Reed:

“One night there flew over the city a little Swallow (…) he was in love with the most beautiful Reed”.

Here the vision of love is given from a selfish point of view: although the Swallow loves the Reed, he is not determined to make any sacrifice for her:

From the moment in which the Swallow meets the statue of the Happy Prince and till the end of the story, a change in his personality can be noticed. The relationship between them progressively increases and they are finally described more as lovers than mere friends:

“‘Goodbye dear Prince! (…) will you let me kiss your hand?’
‘You have stayed too long here; but you must kiss me on the lips, for I love you'”.

In addition a crystal clear image of “true love” is also included when the leaden heart of the statue is broken just before the Swallow has died:

“And he kissed the happy Prince on the lips, and fell down dead at his feet.
At a moment, a curious crack sounded inside the statue, as if something had broken. The fact is that the leaden heart had snapped right in two”.

The theme of sacrifice is maybe the most important of the whole text; because by sacrifying themselves, the protagonists realise that they both are “twin souls”. The Swallow is determined to do what the statue is asking him for (helping poor people) and he does not mind if the weather is too cold or if the other swallows are waiting for him in Egypt. he will help the Happy Prince until his death:

“The poor little Swallow grew colder and colder, but he would not leave the Prince, he loved him too well”.

The same happens with the statue: the vision of the poorest side of the city makes him feel sad and, with the help of the bird, he will give all he gold that covers his body and the ruby from his sword as well as his two saphire eyes to the poor. He sacrifices his beauty and becomes blind and shabby:

“Leaf after leaf of the fine gold, the Swallow picked off, till the happy Prince looked quite dull and grey”.

The sense of happiness is possibly linked with the title of the story: The happy Prince, but it may be a paradox.

The text is continuously making comparisons between the appearance and what people are like inside. When the Happy Prince lived he was “happy” indeed, because he did not kow the real world. Once he is a statue, he becomes unhappy because he is put outside that “bubble” which isolated him before; moreover: he is forced to see the cruelest side of life:

“‘When I was alive and had a human heart (…) I lived in the palace (…) where sorrow is not allowed to enter (…) And now that I am dead they have set me up here so high that I can see all the ugliness and all the misery of my city'”.

At the end of the story the reader realises that the happy Prince only becomes “happy” when his appearance is not an apparenly happy one; in other words: whe he is beautiful and admired he is sad, but when he looses his beauty and gives it to the poor people he becomes happy inside, though shabby in appearance.

Likewise, the theme of beauty is decisive in understanding the tale. If this text has a moral it possibly consists of “behaving generously with the others trying not to be egotistical”.

Each character focuses his own sense of duty on a different way: while the Swallow feels the necessity to help the Prince (indirectly helping the poor people), the statue is determined to give what is his to the people that need it more:

“But the Happy Prince looked so sad that the little Sallow was sorry. ‘it is very cold here’, he said ‘but I will stay with you for one night, and be your messenger”.
“‘I am covered with fine gold’ said the Prince, ‘you must take it off, leaf by leaf, and give it to my poor; the living always think that gold can make them happy'”.

Finally it may be noticed the ability of Oscar Wilde to drive the reader through his own feelings and transmit them easily: love, sacrifice, happiness and duty are put together to create the most beautiful and tender fairy tale ever written.